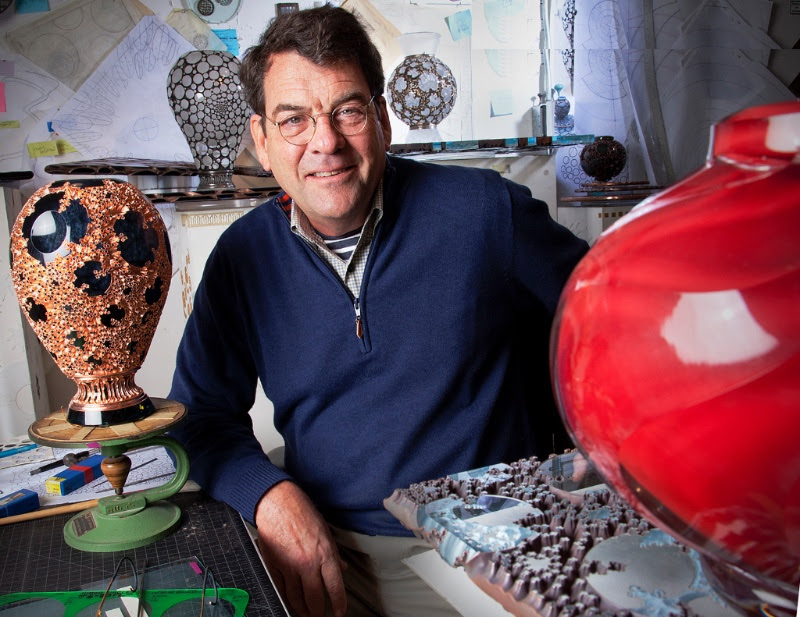 Glancy is a member of the Adjunct Faculty and a Senior Critic, in the Jewelry & Metalsmithing Dept. at the Rhode Island School of Design. He has also been invited Faculty at the Pilchuck Glass School in Stanwood, WA.

Glancy’s career has included numerous solo and group exhibitions, most recently in private galleries in New York City, Paris, London and Brussels. His work has been acquired by major museums and public collections, across the USA and worldwide. See a partial listing HERE.

The Metropolitan Museum of Art in New York City acquired their first Michael Glancy object in 1980 from the inaugural exhibition of Heller Gallery on Madison Ave. Curators returned 27 years later to acquire a major work for the 2007 exhibition ONE of a KIND: The Studio Movement.

In 2003 Glancy was included in the exhibition”Fire and Form,” curated by William Warmus for the Norton Museum of Art in West Palm Beach, Florida. In the book accompanying the show, Warmus wrote: “Michael Glancy magnifies nature in order to reveal its underlying structure…the flat glass panels that form sculptural bases for his artworks…unfold into and inspire the vessels that sit astride them.”

For a listing of current and past exhibitions, click HERE.

Glancy lives and maintains a studio in Rehoboth, Massachusetts with his wife Robin, and has two adult sons. Glancy is also an avid gardener, sailor, and races a wooden Beetle Cat sailboat out of the Edgewood Yacht Club in Edgewood, RI.